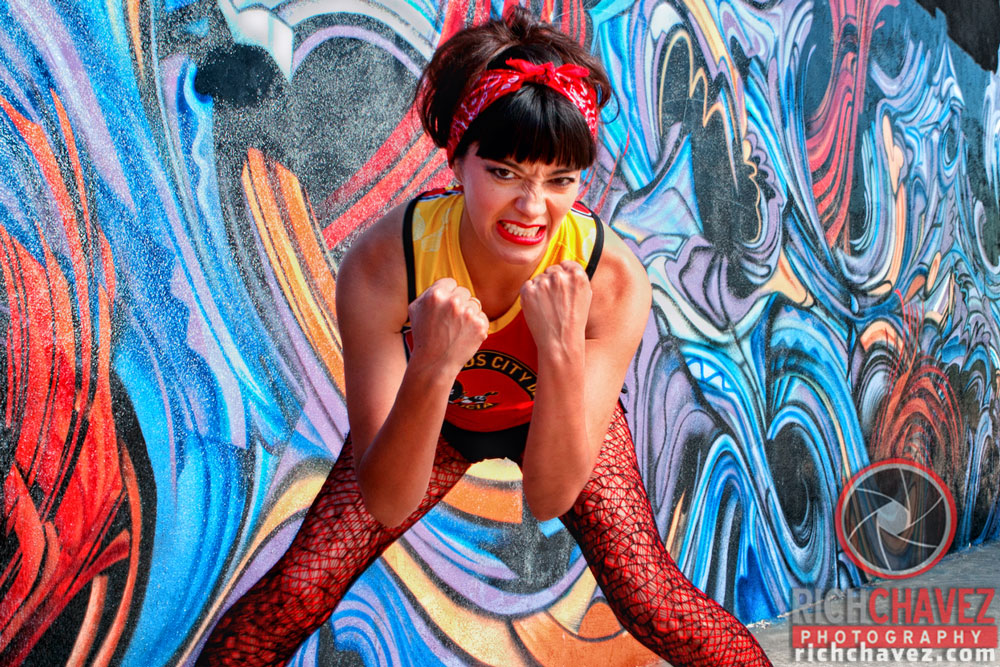 As much as I blog about the derby girls, one might think they’re all I shoot. Since they’re so much fun and the results are so awesome, I’m kind of forced to write about them!

The shoot was for the Crossroads City Derby Sucias; the all-star travel team consisting of skaters from the respective home teams (Reguladies, Spitfire Sallies, and the Rink Rash Revolutionaries).

We decided on some location shots around Las Cruces and met up at the West End Art Depot to get started. The building provided some nice grungy looking backdrops to contrast the beautiful skaters. On the train track, next to the building and gifted by the photo background gods, were a couple of tank cars with colorful graffiti that was left overnight. After getting the required shots, including one of Puncher Villa tied to the train track, we headed over to the colorful handball court on Picacho Avenue.

These were easily my favorite shots; from the individuals to the group shot with the team on their backs (thanks to Goldie Blocks for the killer idea), the artwork on the wall provided a great backdrop. From a photo geek perspective, I tried to shoot wide, from 10mm to 24mm to get as much artwork in as possible. I ended up having to strobe the back part of the wall with a Profoto Magnum reflector separately to get some even lighting across the wall.

The best part for?  My beautiful wife joining me for the shoot, where she assisted me and got the “derby girl experience” first hand.

Thanks to Robbie and Andre for flagging, gripping and holding to stuff for me.