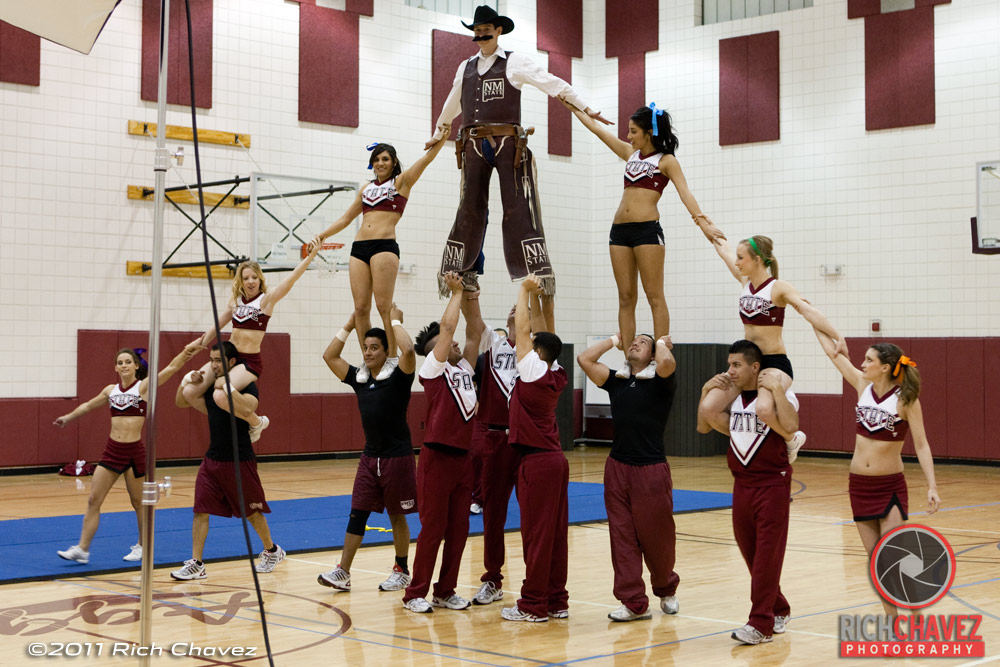 The NMSU Athletics Department honored their student-athletes who excelled academically (better than 3.0 GPA) by having a ceremony for them at half time of the NMSU vs. Boise State men’s basketball game.

As part of the night’s events, the students, grouped by team, were shuffled into the practice gym for pictures and to pick up their medals of honor. Teams included Women’s/Men’s Golf, Women’s/Men’s Tennis, Swimming/Diving, Softball, Baseball, Football, Soccer, Volleyball, Women’s Track, Cross Country and the Equestrian team. Women’s basketball was out of town, and the men’s team was busy on the court.

Each team was allocated five minutes for the group shot and medal-pick up, so things were hectic when teams or students were MIA. Altogether we got over 175 students and coaches through the gym in time for the ceremony, all within an hour.

I have to say my favorites were the first group of the night, the Woman’s Golf team–Apinporn Swaschuto’s chair cracked in half when she sat down (it was already cracked, but her teammates gave her a hard time about it), and the Soccer team, who were goofing around before I could start snapping away.

During the early part of the shoot, the NMSU Cheerleading squad was warming up next to us. I’m not sure if this version of Pistol Pete had had any practice being on someone’s shoulders before–judging from the terrified look on his face, and advice such as “Whatever you do, don’t look down,” and “When they drop you, clench your butt tight,” I suspect not. By the end of the warm-up session, he was comfortably executing the Pistol Pete Pyramid without any problems.